Calling on my drafting skills learned in high-school (and not forgotten) I detailed the bed design, full size, on cardboard so that I could figure out all the dimensions for cutting, joinery and assembly. This was also very helpful as it facilitated building full-size templates for all the curved and irregular shaped pieces and checking them against the full size drawing. 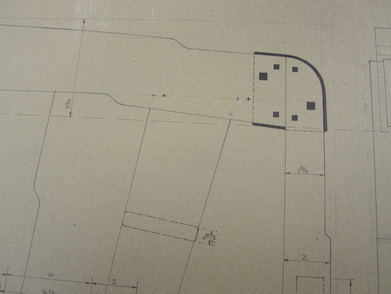 The intersection of the crown-rail and leg, where the black spline is shown in the drawing above, looks fine in front elevation but looked a bit bizarre in the end elevation. To satisfy myself (and the design approval chief) I made a mock-up of the intersection and another design option in case it wouldn’t fly. 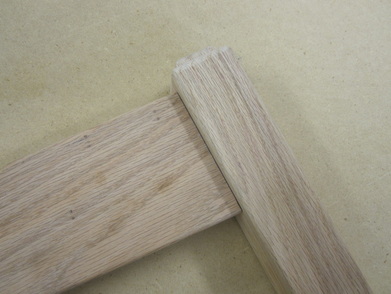 The original design looked good in 3D and was unanimously adopted by the designer and the approval chief. From there, it was on to the making and the “fun” could really begin.

I started out by cutting templates from ¼” Baltic birch plywood and carefully shaping them sanding the edges very smoothly to match the full-size drawing. I found that I only had to sand one cloud-lift of each size and then, using the magic of double-sided adhesive tape, I could shape other similar cloud-lifts using the first one. This significantly sped up the process of making the templates.
The rough 8/4 and 4/4 mahogany was cut, jointed and planed close to finish dimensions, then stickered to allow drying of fresh-cut faces. This hopefully minimizes further twisting after planing to finished dimensions.

While the stock still had parallel edges I began the process of cutting the mortises in the crown and bottom rails for the slats that connects them. This was a two-step process, as you will see in later photos, since the slats have “housed” tenons. This was a feature of many original Greene & Greene designs and provided added strength to the joinery. In my case it allowed me to hide my less-than-perfect joinery! Having the shop-vac helped to keep the area clean for most of the cuts.
The parallel edges of the stock also allowed me to position and cut many of the holes for the square pegs that are fitted near the end of assembly, some functional but most decorative only. 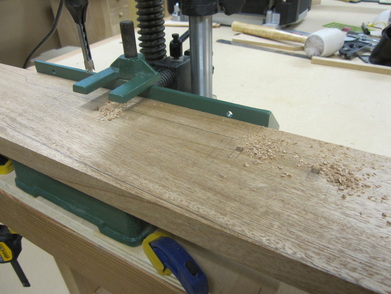